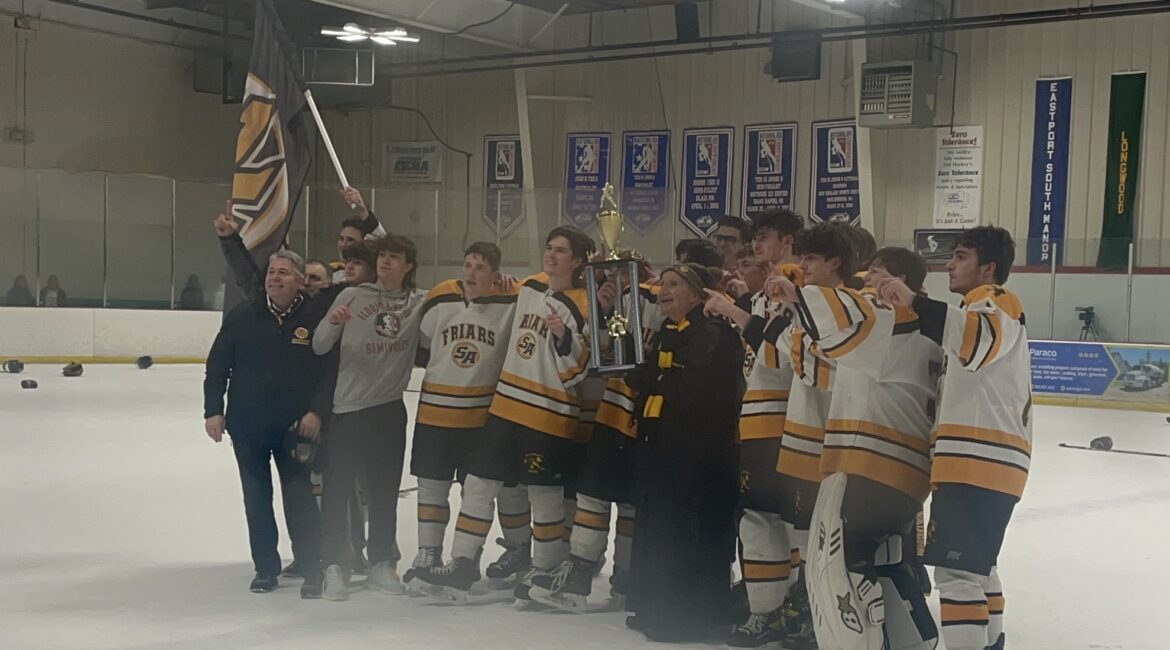 MELVILLE, N.Y.— After an extended hiatus from competing in the SCHSHL, the Saint Anthony’s Friars came back in 2021-22 and made a statement. The 136 goals scored by the Friars was the most amongst all 14 teams last season and their 15-win regular season resulted in a second place finish. Between their dynamic offense, electric power play, and solid goaltending, it became clear that this team had all the makings of competing for a county championship.

Their road towards the title began with a thrilling victory in round one against West Islip and was followed three days later by a last-minute goal against Kings Park/Commack in the semi-finals. The only team that stood in the way of Saint Anthony’s taking home the Varsity crown was Connetquot/Sayville. Both clubs split the first two games in the series and would play a decisive game three to determine who would be named 2022 SCHSHL Varsity champions. The Friars set the tone early in the winner-take-all matchup and would go on to win 4-2, becoming Varsity champions for the first time since 2007-08.

Three weeks later, they’d have another chance to win it all again, but with the stakes being bigger this time around at the NYSAHA High School Club Tournament. Plenty of the opponents were familiar to Saint Anthony’s as the Friars took down East Islip in pool-play and Kings Park/Commack in the semi-finals, setting up a re-matchup with Northport/Huntington after they lost to them in pool-play, 6-2. In the game that mattered most, it was a different story as Saint Anthony’s never trailed and would pull away with a 5-4 victory, once again becoming champions.

An appearance at the USA Hockey Division I National Championships a month later was the last stop for this Friars club that already had two titles under their belt. Saint Anthony’s grabbed one victory in pool-play, but it wasn’t enough as their memorable 2021-22 season came to a close.

As the dust has settled from last season and the countless number of memories were made, Saint Anthony’s have now begun preparations towards title defense in 2022-23.

The only two players from last season’s team to graduate are Patrick Rowan and Anthony Carbone, which means Saint Anthony’s will not only retain the remainder of their team, but will add to an already star-studded lineup. Defenseman Damon Valente will join the program after recently playing with the Suffolk Ice wolves in 2021-22. Keep an eye out for Brody O’Doherty as well after he spent last season in the Atlantic Youth Hockey League with the North Jersey Avalanche.

Three members from last season’s JV Gold squad will come up to Varsity this season as forward Jack Mancini and goaltender Thomas Ulmschnieder look to provide an immediate impact, and reigning St Anthony’s JV Offensive Player of The Year, Matt Dann will surely add to an already potent Friars attack.

Speaking of goalies, senior Ryan Burhart is back for one last season with the Friars. The Long Island Royals product took home MVP honors against Connetquot/Sayville in February and will look to carry over that success from last season.

Stepping away from competition in the SCHSHL didn’t seem to faze the Saint Anthony’s Friars as the club returned in 2021-22 with one goal in mind; to win. They did just that by not only taking home the Varsity championship, but winning the NYSAHA tournament in Saugerties, N.Y. as well.

Combined with their high-powered offensive group, a strong defensive corps, and their rock in goal, the defending champions will look to be the first club to repeat since Smithtown/Hauppauge did so in 2016-17.