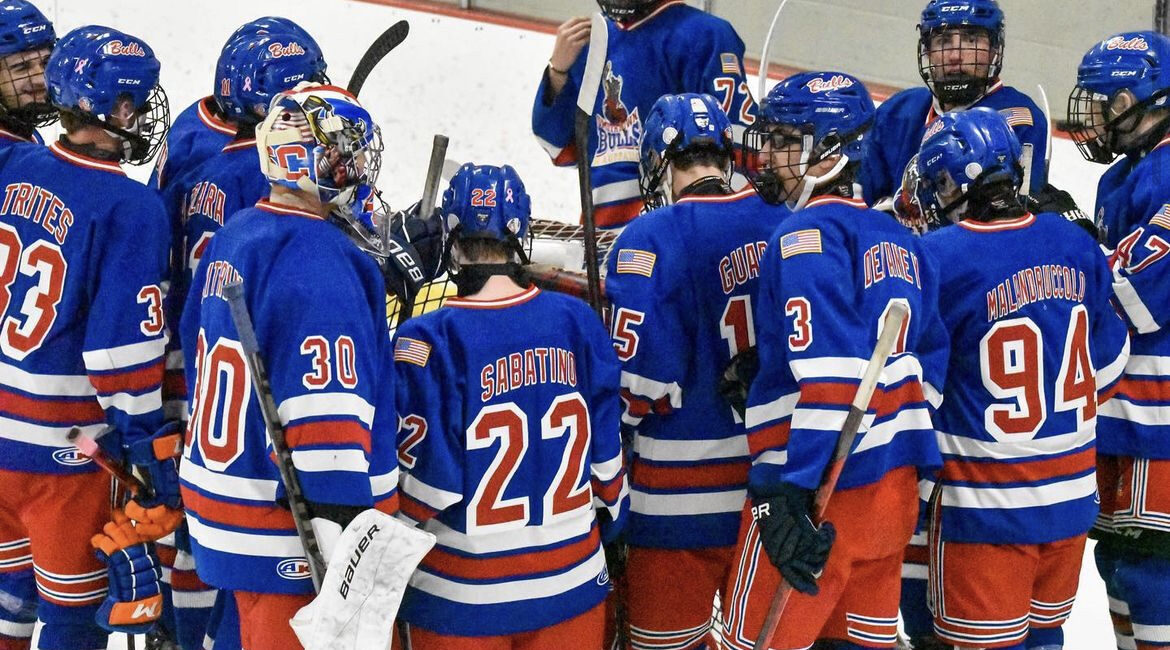 HAUPPAUGE, N.Y.— On Jan. 31, the Smithtown/Hauppauge Bulls were 32 seconds away from a first-round date with East Islip in the postseason, a team they had beaten twice during the regular season. Instead, a game-tying tally by St Anthony’s Gavin Kata squashed that idea and gave the Bulls an entirely different matchup. A one-goal loss to rival Kings Park/Commack ended their playoff run and have now left the Bulls looking towards big things in 2022-23.

It’ll be a challenge to replace the offensive production that Bulls captain Jake Ahearn brought to the table in 2021-22. The All-Star forward led Smithtown/Hauppauge in all three major scoring categories and factored in on about 30% of the 103 goals scored last season. Along with Ahearn, forwards Luciano Signoretti and All-Star Joshua DiBlanda have also graduated after both players averaged at least a point per game.

All three of those players scored ten or more goals for the Bulls last season, so it now begs the question of who can the Bulls look towards for goal scoring in 2022-23?

“We design the team to be a team where I can roll out four lines at any point and depend on all of those lines,” head coach George Zaroogian said. “We’re going to rely on everybody and a lot more guys are going to get some more prominent time this year.”

Zaroogian comes in as the new bench boss for Smithtown/Hauppauge’s Varsity program after leading the Bulls Junior Varsity club to a 19-1-0 regular season record and an appearance in the JV Finals last season where they fell to Sachem in two games.

Senior Nicholas Noce will be one key member of the Bulls offense in 2022-23. The All-Star forward from last season was the only other player to score ten or more goals and average a point per game. Other returning forwards for Smithtown/Hauppauge include Thomas Doyle, Peter Petito, and Robert Trites, all of whom played with their respective Junior Islanders teams last season.

“They’re all really really talented players,” Zaroogian said. “These guys are going to have the opportunity now to play more and show you what they can do. I have all the confidence in the world that they’re going to replace that production and if not, add to it.”

The Bulls will also welcome forwards Colin MacMillan and Zachary Soloman to their club after both played with the Suffolk Ice Wolves last season.

One name that has already stood out to coach Zaroogian is first time Smithtown/Hauppauge player and Junior Islanders product, Alec Ryan.

“He does everything well,” Zaroogian said. “He looks good so far in our practices. He’s very talented and I’m really looking forward to having him on the team.”

This will be Ryan’s first season playing in the SCHSHL after he spent last season exclusively with the 16U AAA Junior Islanders. He will now be reunited with Doyle after the two were teammates with the Isles last season.

Just two defensemen from last season’s squad will be back for Smithtown/Hauppauge in ‘22-’23; Matthew DiPalma and Thomas Agovino. The two seniors will lead the way on the backend, including newest addition Patrick Nulty from the Ice Wolves.

“Pat is probably going to be one of, if not the most talented player in the league next year,” Zaroogian said. “He’s just a really super super talented player and he’s going to help us tremendously this year.”

DiPalma and Nulty not only led their respective teams last season in goals scored by a defenseman, but both players also finished in the top-three during last season’s hardest shot competition with DiPalma recording the hardest shot at 85mph.

Rounding out the defensive corps for the Bulls will be Alan Brandofino, Adam Lackowitz, and Raymond Sherwood, who are all making the jump up from last season’s Junior Varsity team.

“They all are going to really help us significantly,” Zaroogian said.

The goaltending duo of Anthony Scocozza and Jake Citrin was one that Smithtown/Hauppauge had full confidence in on a nightly basis last season. With Scocozza graduated, the Bulls will turn to Citrin, the senior, as the backbone in goal while Luke Pavone gets the nod up to the Varsity squad. Both goaltenders led their respective teams in wins and games started last season.

“Jake’s going to be his (Pavone’s) mentor,” Zaroogian said. “He (Pavone) has the opportunity to really learn from Jake and the two of them have already hit it off in practice. The two will work really well together.”

In hindsight, a 1-1 tie with eventual county champion St Anthony’s doesn’t seem like a bad way to close out the regular season. However, it can be debated just how important that extra point would’ve been for the Bulls. Although Smithtown/Hauppauge comes into 2022-23 with an even split of ten new additions and ten returning players, the common theme between all their players and coaches is that these Bulls are ready to run.

“All of these kids really just want to win,” Zaroogian said. “These kids, they want to sacrifice to make sure that they’re actually doing everything they can to win a hockey game.”