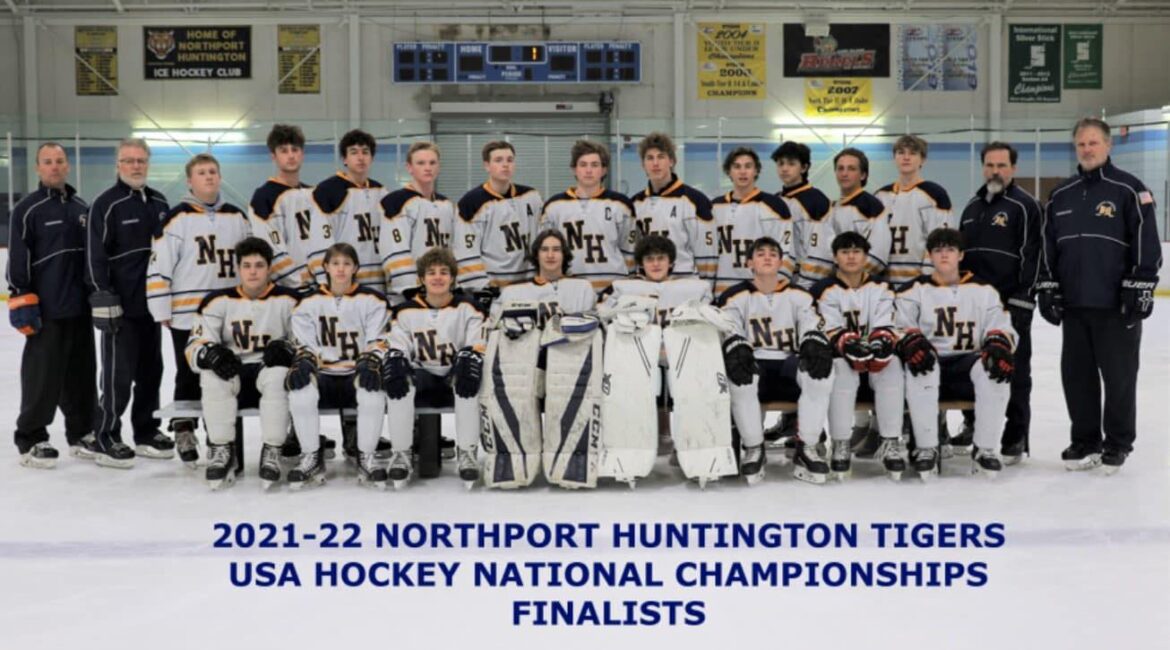 HAUPPAUGE, N.Y.— On a number of different occasions during the 2021-22 campaign, the Northport/Huntington Tigers Varsity team came so close to bringing home some hardware after a historic 19-0-1 regular season. After one goal losses in the SCHSHL Semi-Finals, NYSAHA Tournament Final and the USA Division II National Championship game, the Tigers will unquestionably be motivated to get over the hump in 2022-23. This upcoming season, they’ll be looking to make another deep postseason run, but will need their new faces to step up and returning ones to lead the way.

The Tigers will no longer have their top four point scorers from last season, headlined by forwards Blake Hanson and Carmine Pitelli, both who averaged over two points per game. Rounding out the Tigers’ top four scorers are defenseman Michael Meyer and forward Derek Macholz. These four players combined for 82 of the 130 goals scored by Northport/Huntington, which comes out to a whopping 63%. It’s not going to be easy to replace 82 goals, but the Tigers have a strong amount of reinforcements coming in.

For starters, last season’s Junior Varsity leading goal scorer Jake Giacoppi is getting a well deserved promotion up to the Varsity squad after potting 21 goals in 17 games and also led the JV Tigers in assists (8) and points (29). Joining Giacoppi on the Varsity squad this season are fellow JV teammates Blake Brown and Joseph Boeckmann, both who finished with double digit point totals. Additionally, brothers Ryan and Billy Collins are also joining the club after playing last season with the prestigious Long Island Gulls organization.

While Northport/Huntington are losing some heavy hitters on the offensive side, defensemen Robert Savaglio and Tyler Paragallo are back for the Tigers. They’ll surely step into bigger roles in ‘22-’23 and be two of the newest leaders on the backend. Paragallo was a key piece on Northport/Huntington’s man advantage last season dishing out a team leading six power play assists. On the other hand, Savaglio was not only one of the most disciplined players on the Tigers, but in the entire Varsity division last season and took just one penalty all season long.

Not many teams have the luxury of two goaltenders putting up video game type numbers on their roster, but that happened to be the case last season for the Tigers with Aidan Donnelly and Angel Spinelli. The two combined for a division leading six shutouts with Donnelly having four (also most in the Varsity division). However, Donnelly has graduated, which means the keys to the crease are now in Spinelli’s hands. He’ll be sure to get a majority of the workload while Hailey Martin and Evan Schubert will back him up.

To top things off, head coach Michael Porcello came away with the Robert Dunbar Memorial Coach of the Year Award last season. Porcello is the first two-time winner of the award in SCHSHL history after previously receiving the honor in 2015.

2021-22 marked three straight seasons that Northport/Huntington had made at least one appearance in a championship game and could not finish the job. Players and coaches can almost taste that coveted championship trophy after experiencing heartbreak not once, but twice last season. Now, the Tigers will shift their focus to 2022-23 in hopes of bringing home a title for the first time since 2014-15.